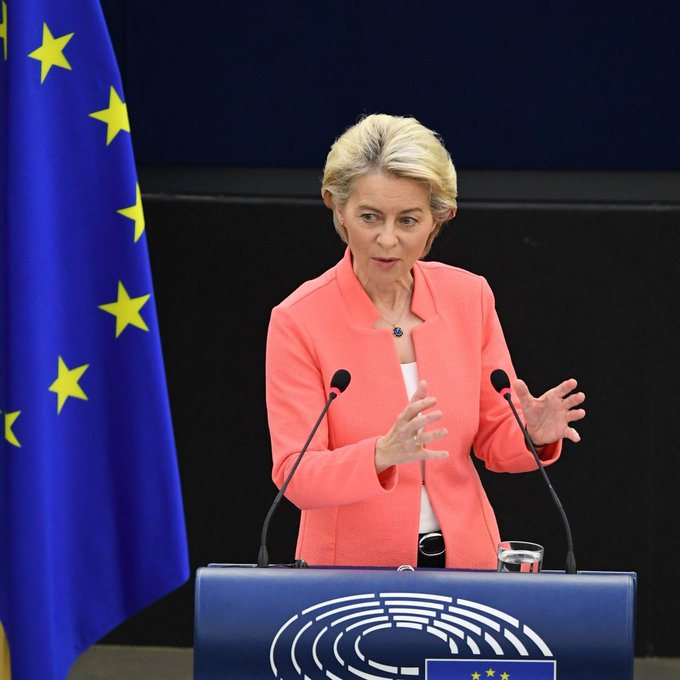 SPEECH ON THE STATE OF THE UNION

The #SOTEU (State Of The Union Speech) pronounced by the European Commission President, Ursula von der Leyen has brought up many topics that her mandate will try to pursue in 2022 showing the way to business and civil society associations to build up their upcoming. After which she got answers from different MEPs of the various political groups.

The speech was done in English, French and German and it addressed a wide variety of topics. These  mainly concentrated  on issues regarding vaccination policy, Next Generation EU and the consequent reforms, new initiatives on microchip production for tech sovereignty, the development of the Green Deal with initiatives on carbon emission and measures to avoid natural disaster within EU territory, security issues that concern the EU (cooperation with NATO, cybersecurity, regional stability, European Defence Ecosystem), youth and issues regarding Human Rights, with cases mentioned like Afghanistan and Belarus.

Some of the many aspects expressed by the Commission President should really be a focus of attention for business and civil society associations involved in EU affairs. Most of these topics are about financial aid, programmes or regulations that will affect the corporate decision making.

President Von der Leyen has given a lot of importance to the topic of technology in her speech. This topic has its strategic importance due to three points: first, for the EU to achieve technological sovereignty; second  to guarantee the cybersecurity of the EU (von der Leyen affirmed on her speech “if everything is connected then everything can be hacked”); and third, the EU shall develop the well-functioning of the public and private sector through a digitalization process.

These three points could serve as an indicator of what Europe wants to achieve: to function through technology and therefore control that technology, both the production of the hardware and the protection of the software. Due to this, digital and technological companies should probably be interested on guaranteeing even more the protection of their data against the threat of hackers. Companies might be interested in boosting the production of microchips and other hardware within Europe because it is in the interest of the Commission to bring financial support and advantages when doing so. Moreover, some companies might also realize their interest of working with public institutions in order to begin a digitalisation process for the same reasons from above. In that regard a new range of opportunities is coming.

Furthermore, integration in taxation is becoming increasingly important. Although not referring directly to the big tech companies, von der Leyen highlighted on her speech that the EU is going to fight tax avoidances and make sure that big companies pay their fair share. This could be interpreted as a message for big tech companies since they have been engaged in a fight with the Commission regarding tax avoidance even before von der Leyen came to power. Due to that, it would be wise for many of these tech companies to take this into consideration.

With the ‘Fit for 55’ package recently adopted last July as the great lobbying arena to come, another major issue mentioned has been the environment and the “Green Deal” which will inherently affect, among many other stakeholders, many companies both in the way they produce and manage their waste as well as new opportunities for some enterprises. President von der Leyen clearly specified that “climate goals” must turn into “legal obligations” which means that companies will probably face new regulations.

In her address to the European Parliament, President von der Leyen expressed her intentions of putting a price on pollution. She did not specify if this levy would come to Member states or companies but is likely that, if Member states are the ones taxed the cost will inevitably be transferred to the companies. This could end up in a variety of legal conflicts within Member states and European authorities.

At the same time these new initiatives will certainly create new opportunities for many companies active in sectors like electric batteries, electric cars or recycling. In her speech, President von der Leyen highlighted the development of industries such as the German or the Polish that have been making great progress on the abovementioned sectors both in production and domestic sales. This could mean that the EU will offer incentives to companies that reduce CO2 emissions. At the same time, other companies such as the ones from the recycling sector have not been specifically mentioned but still could find new opportunities in the near future in potential EU sponsored recycling programs.

The final point of her speech is related to human rights and more specifically to forced labour and the implications that it has for many companies. In her speech von der Leyen was clear on her stance against the supply of products through forced labour: “[s]o we will propose a ban on products in our market that have been made by forced labour”. This can be seen as a reference not necessarily to the regimes mentioned in her speech (Belarus or Afghanistan). If the EU starts penalising these actions, then many companies will need to start checking their suppliers and, in some cases, might be forced to look for alternatives that in some occasions might increase their costs.